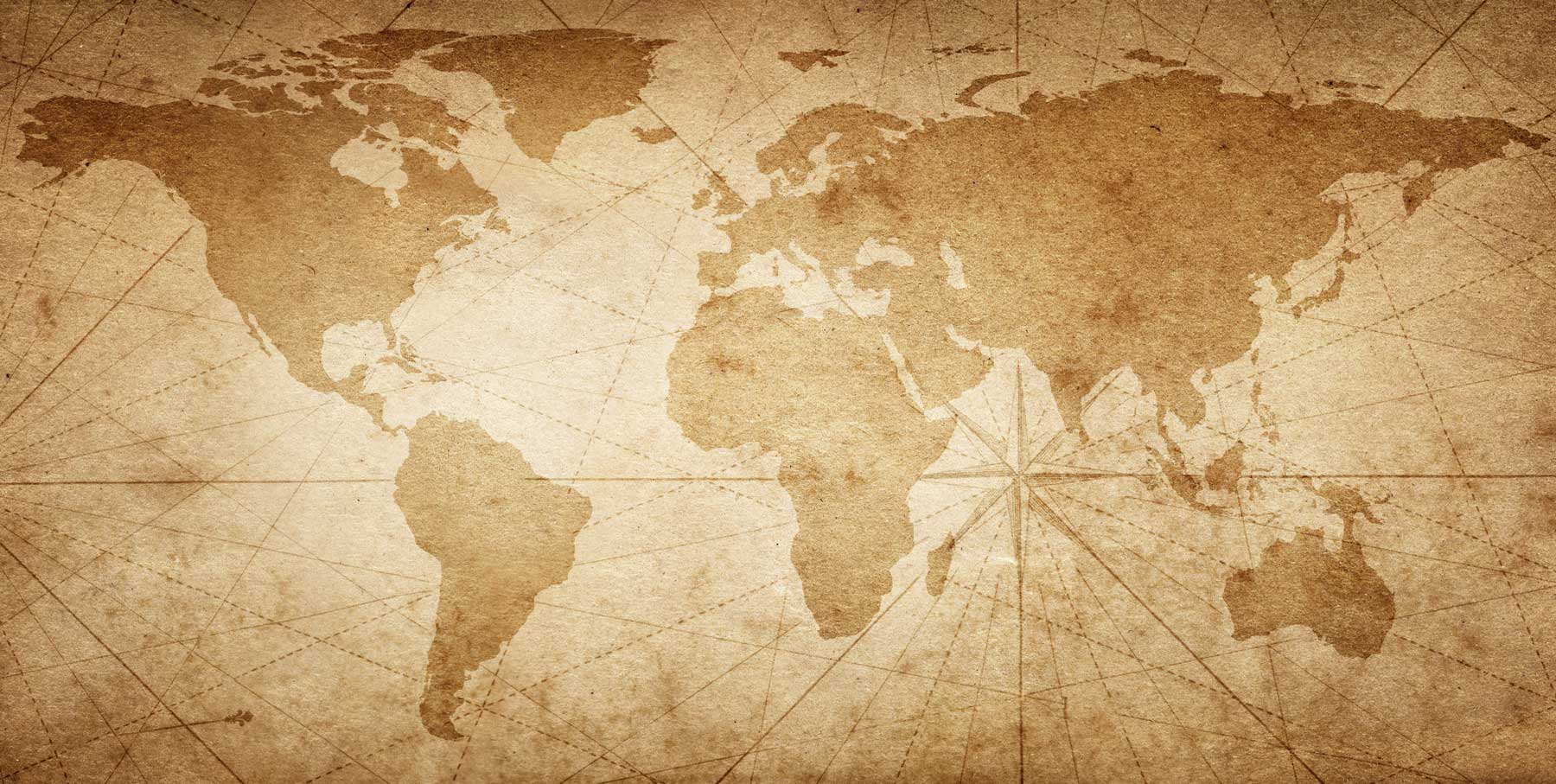 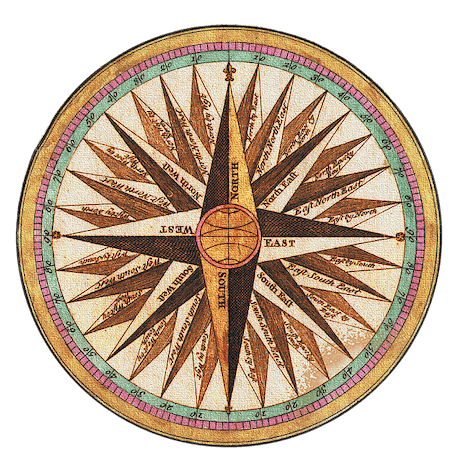 The evolution of maps has taken a long and winding road.

For thousands of years, humans have documented their surroundings in the form of cave paintings, stone tablets, religious maps, printed maps, and the multi-layered digital maps of modern day.

From ancient Babylon, through the Renaissance and Age of Exploration, and into the era to modern cartography - mapping history offers a fascinating look into the collective psyche of each period.

This post starts at the beginning, tracing the history of maps through the ages.

Ready to skip forward a few thousand years and start mapping yourself? Check out our review of modern mapping software.

II. Maps in the Middle Ages

The oldest map in the world

According to some scholars, this 9ft wide cave painting is the oldest map known to man.

Discovered in what was once Anatolia (now modern day Turkey) and dated between 6100 to 6300 BC, this cave drawing is thought to outline the ancient city of Çatalhöyük.

It's believed by some that the drawing depicts a volcano and some 80 buildings in a distinct honeycomb pattern. That said, there is some disagreement about whether or not this illustration is actually a map.

Some believe the squares are simply a geometric design, and that the volcano is actually a leopard skin. With so little evidence for either argument, it’s difficult to say one way or another.

Either way, this Anatolian cave painting is a fascinating piece of history - one that arises frequently in discussions of ancient maps.

Anaximander's map of the world

Greek academic Anaximander is believed to have created the first world map in 6th century BC.

Anaximander reportedly believed that Earth was shaped like a cylinder, and that humans lived on the flat, top portion. This belief is reflected in reproductions of his map and, upon examination, it’s clear Anaximander's overall understanding of global geography was incomplete.

Despite its limitations, Anaximander's illustration is the first known attempt to include the entire world on one map.

Previous maps were limited to a city, or potentially a country, but representing the entire globe was a novel concept.

Dated between 700-500 BC, this clay tablet depicts the ancient city of Babylon as the center of the world. Approximately the same size and shape of an iPhone, this map is quite detailed and fairly advanced for it's time.

Unlike most maps from the same period, it includes islands. This inclusion illustrates an understanding that the ocean isn’t the end of the Earth - a common belief for much of early history.

The Babylonian tablet is as much a record of spiritual and cultural belief, as it is a map.

Babylon is shown at the center of the map i.e. the center of the world, and in the space beyond there are notes describing various heroes and mythical creatures. Despite clear records that Babylonians were aware of other civilizations, like the Persians, the tablet contains no mention of them or anyone else.

In the early centuries of cartography, maps were not always concerned with accurately representing reality. Rather, they were designed to tell stories.

So little was known about the world that any gaps in knowledge were filled in with religious or spiritual beliefs, and theories about what existed beyond the known.

Ptolemy, another Greek philosopher and academic, is regarded as the world's first geographer. However, inventing the field of geography was never his goal.

Alive in 2nd century AD, Ptolemy was obsessed with the idea of horoscopes. He tirelessly researched and recorded birthplaces for over 10,000 people: devising as he went a system of vertical and horizontal lines on which to plot his data.

Like most Greeks at the time, Ptolemy knew the Earth was round.

Seeking to improve the accuracy of his lined system, and taking the Earth's roundness into account - Ptolemy invented a method to flatten the planet into a 2D representation.

He called this technique 'geography.'

Ptolemy's geographic foundation was lost for much of the Middle Ages.

Though some scholars expanded on his contributions, using the notes and writings of merchants, maps during this time period were again devices for storytelling.

While many maps offered a significant level of detail, much greater than in centuries past, most were not concerned with presenting an accurate geography.

Al-Sharif al-Idrisi and the Tabula Rogeriana

With 70 regional maps, it’s considered by some to be the world’s first atlas. There are lengthy descriptions for each geographical section: covering natural features, ethnic groups, socioeconomic trends, and more.

Regarded as the correct direction for prayer, all the maps in Tabula Rogeriana were oriented with South as the focal point.

Other maps from the Middle Ages have a clear Christian perspective.

This map orients East at the top, and includes an impressive geography with continents and some 420 cities and towns.

It also displays a plethora of religious and mythological motifs. Adam and Eve in the Garden of Eden are shown at the very top, while the Pillars of Hercules are shown to the West. There are mythological creatures, animals, birds, and 15 biblical scenes.

Many interpret this map, not as a guide from town to town, but as a route towards the divine.

During the Renaissance, Ptolemy’s geographic foundation reemerged after roughly 1,000 years on the academic shelf. This period also saw the invention of several devices that changed mapmaking forever - printing technology being one of the most significant.

The combination of these factors led to a new era of cartography, in which maps were not only increasingly accurate but more widely available. Improved accuracy was especially important.

The Age of Exploration had begun, and explorers and traders needed maps with which they could effectively navigate over land and across oceans.

As the New World was charted and explored, merchants navigated the oceans for trade, and Kings surveyed lands with an eye to building empires.

Maps began to inform military strategy and, for the first time, included compass lines to guide sailors. The Mercator Projection, one of the greatest mapping innovations after Ptolemy, was unveiled in 1569.

Inventor Gerard Mercator set out to create a map that would assist with global navigation.

To solve the problem of representing a 3D sphere in a 2D rectangle, Mercator created a projection that lengthened the latitudes North and South of the equator. This distorted the poles significantly, but provided a surprisingly accurate depiction of areas closer to the equator.

This projection was so popular amongst European navigators that by the 18th century, it had been adopted near universally.

19th Century and the Industrial Revolution

The trend towards accurate mapping increased even further during the 19th century and the Industrial Revolution.

The invention of the railroad made travel faster, cheaper, and even more accessible. Leisure travel became popular among the middle class.

As a byproduct, maps had to be smaller and more practical, so travelers could bring them on the journey. They also needed to be up-to-date in terms of roadways, railways, and transportation hubs.

Maps in this era had become almost entirely factual.

This period also saw the emergence of thematic maps i.e. maps that use data in conjunction with geography to illustrate a trend or theme.

In the 1880s, social reformer Charles Booth created a moral map of London that color-coded houses by income and criminal tendencies. His goal was to help inspire the poor by showing that geography was tied to destiny.

Unfortunately, though not necessarily a surprise, his plan backfired. U.S. banks adopted this strategy to “redline” poor neighbors and refuse loans to anyone in those precincts.

This long journey brings us to modern cartography.

With the rise of digital technology, modern cartographers now use a plethora of hardware to collect data and do most of their work on a computer.

Geographic information systems (GIS), which emerged in the 1980’s, gave cartographers the ability to combine geographic data sets with topography and street maps.

With GIS, users can design multi-layered maps, conduct deep data analysis, and even create 3D visualizations of cities, forests, and natural landmarks. Plus, the recent development of Mobile GIS brings these powerful map making tools onto any mobile device.

In many ways, GIS is the pinnacle of modern map making, a stark example of just how far cartography has come.

A quick guide to modern cartography

We’ve written an entire guide to modern cartography, so if you’re interested in learning more - be sure to check that out:

Cartography has come a long way. From stone tablets and cave paintings, to massive satellite networks - humans have always used maps in an attempt to answer questions about our world.

Influenced heavily by the intentions of those who make them, some would argue that no map is 100% accurate. Even so, the technological advances are impressive and today's maps tell stories more truthfully than ever before.

Ready to get started?

If you'd like to start making maps yourself, we've compiled a list of seven of the best online map makers.

Plus, check out Unearth's OnePlace if you're interested in getting started in GIS or need to map key assets and field work.

Upload your team's files - spreadsheets, photos, PDFs, and more - to unlock a new dimension to your data: location.

See how easy map making can be with a free trial.